Wunderino is an online casino which was launched in 2015. It has a really cool design, with an animated video greeting you when you start, followed by all of its available games. The more you scroll, the more the website tempts you with colourful picture and thrilling bonuses. Wunderino is available in five languages, and supports five different currencies: CAD, EUR, GBP, NOK and USD. Available payment methods include Debit/Credit cards, Paysafecard, Trustly, EcoPayz, Neteller, Skrill, and several others which are region specific. All of them have a €10 minimum deposit. You also don’t have to worry about being charged any fees on either deposits or withdrawals. The minimum withdrawal is €20 per transaction. 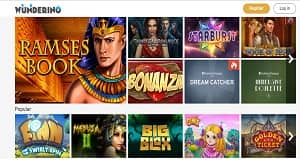 The casino does not have any third party verification of their random number generator. It’s not mandatory to have external confirmation, but it is a good way to show your player-base you’re trustworthy. Wunderino also does not have an appointed ADR provider, which means any disputes with the casino are final. The website is licensed by the Malta Gaming Authority, which is one of the best regulators currently on the market. Their license usually a good indicator of a casino’s quality, so we’re not surprised to find it here!

Over 2000 games by various software providers are available to play at Wunderino! These include slots, table games, live casino titles, and several other categories of releases. Just the sheer number of games is super impressive, but it’s doubly so when you take a look at the developers behind them! At this casino, you can play releases by NetEnt, Play’n Go, Yggdrasil, Quickspin, Evolution Gaming, and numerous other software providers. The casino also has a good search function, allowing players to search for specific games or developers.

If you were hoping for a massive number of table games, we’ll have to disappoint you. That said, there’s a bit more variety than we expected, which is a big plus. Don’t get us wrong, there’s plenty of blackjack and roulette to go around! But you also get releases like Mahjong Exchange and several types of poker. Fans of classic slots will also appreciate them getting their own category, we’re sure. Sure, the mechanics may look the same, but the way they play and feel tend to be completely different.

Live casino releases are either powered by Evolution Gaming, or are ran by Wunderino themselves! The vast majority of games are baccarat, roulette, blackjack and poker. But you do get a few releases that buck the trend. There’s a lucky wheel, and several of Evolution’s more unique games. Side Bet City, Football Studio, Deal or no Deal, Monopoly Live… these are just some releases which offer something a little bit different than what we’re used to.

Want to play at Wunderino? There’s an app for that. Two of them, to be exact! One for iOS and one for Android. But while the iOS app is a straight-forward install from the Appstore, Android is more complicated. You will have to fiddle with your device’s security settings to install the app, which isn’t something we’d suggest to casual Android users!