Casumo is an online casino founded in early 2012. Since then, it’s become one a fan favourite website, owing to its elegant design. Pure white with a few colourful elements here and there seems like it’d be dull, but somehow, Casumo makes it work. The website has great functionality, but it can be difficult to find at times. For example, you can search by software provider: but you wouldn’t know it unless you tapped the search bar. The casino is available in six different languages, and supports five different currencies. Both deposits and withdrawals don’t have any fees associated. Deposits for all payment methods should be instant, except for Bank Transfers, which can take between one to three business days. When making a withdrawal, you must withdraw at least €10. 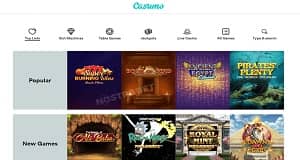 Unless we missed something, it doesn’t seem that Casumo has any third party verifying their return to player. This isn’t a deal-breaker, but it does lose the casino a few points compared to its rivals who have their RTPs audited every month. In case of a dispute with the casino, you can speak to eCOGRA, their appointed ADR provider. Gamblers from the EU can also seek assistance through the EU’s ODR platform. The website has two licenses. One issued by the Malta Gaming Authority, and the other by the United Kingdom Gambling Commission.

The casino claims to have over 2000 games available to play, and we’re quite willing to believe them! The sheer number of available releases is actually a little bit overwhelming, if we’re perfectly honest. It helps that Casumo has split them into several categories, but slots are still a nightmare to navigate. The search bar helps a little bit in that regard, as it lets you find your next slot. It also allows you to sort by software provider. Available software providers include NetEnt, Microgaming, Yggdrasil, Thunderkick, Evolution Gaming, and multiple other developers!

We can’t say that the selection of releases in the Table Games section has blown us away. A lot of it are different variants of blackjack or roulette. And don’t get us wrong, those are important! They are the most popular casino releases for a reason. That said, when all other types of games are drowned out by nigh-on duplicates of these two, it may be time to diversify a little bit. The lack of less popular games also extends into stuff like video poker, scratch cards or bingo and keno. These releases are nowhere to be seen.

At Casumo, the live casino section isn’t as lively as it might be with other websites. The operator offers several blackjack and roulette games of its own. And the ones it doesn’t are handled by Evolution Gaming or NetEnt! The best part about this is that Casumo has some of Evolution Gaming’s less orthodox releases. Think Monopoly Live, Deal or No Deal, and Lightning Dice.

Android fans have a Casumo app they can install to play it on their device of choice. That said, it does require players to fiddle with their system settings to download the app. This isn’t something we can recommend to casual Android users.