CasinoEuro was founded in 2002, and is part of the Betsson Group, one of the best known online gambling giants. The website lives up to our high expectations with ease, with over 1700 games available! There’s twelve software providers whose entire libraries are available to play at this casino. Available languages include English, German, Spanish, Norwegian, Polish, Portuguese and Finnish. You have six currencies available, which you can use for both deposits and withdrawals. Payment methods available for everyone are credit cards, Skrill, Neteller, Entropay, Paysafecard and bank transfers. You can use the same payment methods for withdrawals, apart from Paysafecard. Withdrawals are near instant for Neteller and Skrill, while bank transfers and credit cards take between two to five days. 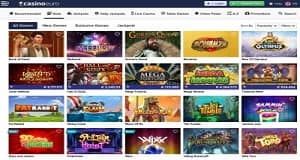 It doesn’t seem like CasinoEuro lists RTPs individually anywhere. You can see them only if they are mentioned within the game itself. There also doesn’t seem to be any third party verification of the random number generator. CasinoEuro has selected eCOGRA as its ADR provider. The website is also licensed by Malta’s Gaming Authority and the British Gambling Commission, two of the most stringent regulators.

When you land on the casino’s page, they boast about having over 1400 games total. But by our count, that number is actually 1772, which is drastically more than expected! In order to be able to deal with such a massive amount of releases, CasinoEuro allows you to filter them by software provider. This, alongside the ability to play almost every release in demo mode, made it a lot easier to sift through the large pile of games. And as you’ll see, there aren’t no-name developers either. NetEnt, Nyx, Play’n Go, Thunderkick, Yggdrasil, Red Tiger… they’re only some of the fantastic developers whose games we get to play at this casino.

We should also note that filter by developer only works for slots. Other categories aren’t crowded enough to warrant the system. For example, you only have 49 table games, so there’s no real need to filter. If numerous variations of blackjack and roulette aren’t your thing, no need to worry! CasinoEuro carries quite a few releases which break up the monotony. Several table and video pokers, baccarat, craps, Red Dog, Punto Banco, and so on.

Best we can tell, the entirety of the live casino is powered by Evolution Gaming. The website is nice enough to tell you if any seats are available, and what the last results were for any running roulette games. There are a total of 53 live games, out of which 15 are roulettes, 7 are blackjacks, and 14 are other. What falls under Other? That’d be Evolution’s ambitious experiments and releases which don’t fit the previous two categories.

CasinoEuro has apps available for both Android and iOS. But while iOS get to directly install theirs from the appstore, Android has to make changes to their settings before they can install the app. On iOS, the app can even make use of TouchID, if that’s something that strikes your fancy.